Woman stands at the entrance to the Lions Gate Bridge

[by Glenn Tkach] The Lions Gate Bridge arches proudly over the First Narrows. It is visible from the Stanley Park seawall, and a major feature of The Dark Secrets of Stanley Park Tour.

Two proud lions guard the entrance to the bridge, flanking its entrance in Stanley Park. In the photo above, you can see one of the stone beasts here, just after the bridge’s opening. Look how tall! Even if it crawled down from its pedestal, it would still tower over the woman standing beneath it.

Just beyond the statue, a sign informs drivers of the toll they must pay at the other end. Initially, car drivers paid 25 cents to cross over the bridge – likewise for riders of horses and carriages. Pedestrians, on the other hand, paid just 5 cents. The toll was in effect until 1963, although by then the rates had gone up.

Since the bridge opened in 1938, the two Lions have seen their fair share of shenanigans. Just one month after the opening, someone jumped from the bridge. On December 16th, Oscar Erickson leapt from the Lions Gate Bridge “just for the Devil of it.” It was a record-setting jump.

Steve Brodie held the previous record, for his 100 foot plunge into the East River from the Brooklyn Bridge. Brodie’s daring leap in 1886 was the stuff of legend, but many people believed that he had faked it – using a dummy to take the fall while he himself slipped quietly into the river from a barge.

Oscar Erickson had certainly not faked his own daring plunge – and it was twice Brodie’s record. His jump from the Lions Gate Bridge was from a staggering height of 200 feet.

There was yet another daring jump that day – a man named James Morrison jumped into the waters of the First Narrows from Hollyburn ferry. He swam toward the unconscious body of Oscar Erickson, and kept him afloat until their rescue. Oscar survived his adventure unscathed – “one of the hundreds of patients in General Hospital today who has nothing wrong with him.”

The Man Behind the Sculptures

Charles Marega with one of his sculptures

Local sculptor Charles Marega carved the statues of the two lions. At the time, the Vancouver Province said he was “acknowledged to be the greatest sculptor in Western Canada.” He is also the artist who chiseled numerous other iconic Vancouver sculptures. Among them: the statue of Captain George Vancouver at City Hall, the Joe Fortes Fountain at English Bay, and also the statue of Mayor David Oppenheimer at Stanley Park. To name a few.

The two guardians of the Lions Gate Bridge were Marega’s final work. Just two months after seeing them installed, he passed away at the age of 67.

One of the two lions

The two lions share a few secrets. Like mythological monsters, they began their lives as headless creatures. Thanks to their size and weight, their heads were cast in separate molds. Each head adds two tons to the already massive 6.5 tons for each body and its pedestal.

Each lion hides under its paws a few silver coins, placed there by workmen. And the tail of one of the lions conceals a five cent piece. But their greatest secret is an inner secret, buried deep within one of them.

One of those lions – and no one knows which one – has within it, a little box of memorabilia. That box contains somebody’s baby shoes, and it has another secret, too. To find out whose feet filled those shoes, and what else that box contains, join us for The Dark Secrets of Stanley Park Tour. 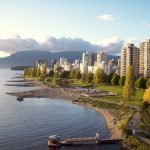