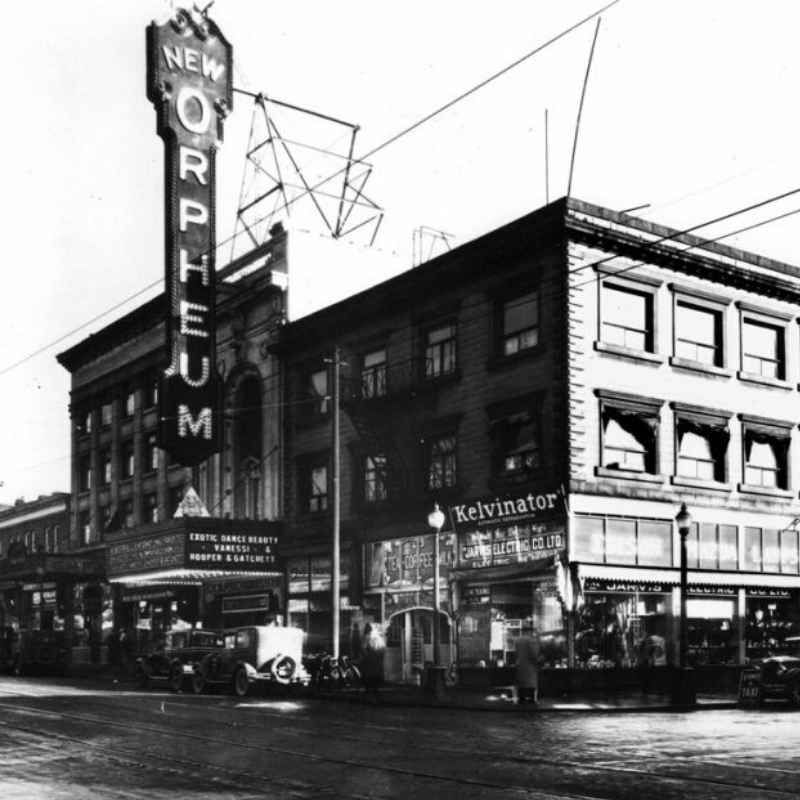 [by Glenn Tkach, creator of the Really Gay History Tour]

This is the Orpheum Theatre on Granville Street, just two years after it opened in 1927. It’s been dubbed “The New Orpheum” because it is the fourth to be built in Vancouver. Its previous incarnation was located at the corner of Granville and Georgia, where Nordstrom’s now resides, and where the Really Gay History Tour begins.

It was originally a venue for touring vaudeville productions. These family-oriented variety shows included singers, comedians, magicians. And of course, cross dressers. There were male impersonators as well as female, but female impersonators were more common.

Julian Eltinge was a world-renowned female impersonator. He appeared at the previous Orpheum in the early 1920s. While some impersonators played up the comedy of cross-dressing, Eltinge took a more nuanced approach.

He was actually billed as a female performer. While in his feminine persona, he would exquisitely perform entire song and dance routines. And then, at the curtain call, he would dramatically remove his wig. His big reveal shocked audiences into thunderous applause.

By the time he came to Vancouver, his performances had become world-famous. He could no longer get away with such deception. But he continued to delight audiences across the world at venues such as the Orpheum.

In the era of vaudeville, cross-dressing like this was family entertainment. There was nothing controversial about it. No one considered it a sign of homosexuality. But as vaudeville theatre fell out of style, attitudes about cross-dressing were beginning to change.

People began to notice that homosexuality was more widespread than previously suspected. Authorities reacted by stepping up their persecution. Cross-dressing became more suspect, and therefore more risky. It went underground. By the 1950s an underground version of it began to emerge within the gay scene, known as “drag.”

No longer at high-profile theatres like the Orpheum, drag queens in Vancouver were instead performing in secret gay bars. Even there, other gay men sometimes derided it. It was a scary time to be out, and many gay men didn’t appreciate such overt and risky displays. In addition to being scorned by the outside world, drag queens fought to find acceptance within their own community.

After decades of struggle, drag queens boldly took to the stage of the Orpheum once again. The Orpheum debuted the first Ms. Alternate Pageant in 1983. This pageant became an annual event throughout the decade.

These events were not just for the queer community – tickets were available to the general public. Cross-dressing as public entertainment had come full circle at the Orpheum Theatre.

In September of 2019, the queens of RuPaul’s Drag Race performed in Werq the World at the Orpheum Theatre.

To learn more about the fascinating struggle of drag queens and others in Vancouver’s queer community, join us for the Really Gay History Tour.