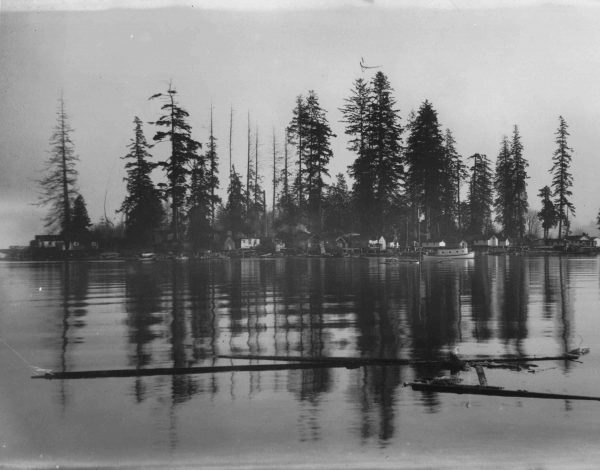 [by Kendall Walters]  Think of Stanley Park and you probably picture sunny walks on the seawall and quiet afternoons exploring the Vancouver Aquarium, but did you know the park is actually home to one of the most haunted islands in North America? Though closed to the public, Deadman’s Island is home to ghostly lore centuries old. The list of spectral sightings and strange phenomena continues to grow… Loud clanging noises ring out in the dead of night. Hurried footsteps pace back and forth. The unearthly moan of a young woman’s sobs fills the still air. Tales of supernatural encounters stretch back more than a century…

The Skwxwú7mesh (Squamish) people call the place the “Island of Dead Men.” A long time ago, it’s said it was the site of a fierce battle. Mohawk poet and writer E. Pauline Johnson captured the tale as her friend Chief Joe Capilano recounted it. Northern and southern nations fought over claims to island. The southern nation kidnapped 200 women, children and elders from the north and held them captive. When 200 young northern warriors traded themselves for the hostages’ freedom, they were cut down on the spot. Johnson quoted Capilano’s description of the aftermath in her 1911 book Legends of Vancouver. “In the morning the southern tribes found the spot where they fell people [filled] with flaming fire-flowers. Dread terror seized upon them. They abandoned the island.” Johnson wrote of the flowers. “In the depths of the undergrowth on Deadman’s Island there blossomed a flower of flaming beauty… but somewhere down in the sanctuary of its petals pulsed the heart’s blood of many and valiant men.”

Hear many more strange tales from the park on The Dark Secrets of Stanley Park Tour, every Wednesday, Saturday, and Sunday from May to November

In the 1860s, the government offered to sell the island to Samuel Brighouse. He declined the offer, but one of his partners, John Morton set out to explore the area anyway. He rowed to the island where he found hundreds of red cedar boxes, scattered in amongst the foliage and perched in the upper branches of the trees. Morton quickly discovered the boxes were fragile when he reached up to touch one and it crumbled above his head, showering him with the bones of its long-deceased inhabitant.

In the 1890s, a plague descended upon Vancouver. During the smallpox outbreak, Deadman’s Island was used as a “pest house.” Catching the illness was akin to a death sentence. Those who fell ill were sent to the isle for quarantine. If they got better, they were allowed to return home. If not, they never left.

From 1899 to 1930, Deadman’s Island was home to a logging dispute. The federal government leased the land to American industrialist Theodore Ludgate, who wanted to build a lumber mill. Local authorities and residents alike were outraged – to them it was clear that Deadman’s Island was part of Stanley Park and not open for development. At 6:30 a.m. on April 24, 1899 Ludgate headed out to the island with 30 men to log the area. But then-Mayor James Garden was one step ahead. He anticipated Ludgate’s move and brought almost the entire police force with him to the island. When Ludgate attempted to cut down a tree, he and his men were arrested. Several similar episodes dotted the decades until Ludgate’s lease expired in 1930. In a 1909 incident, police occupied the island overnight to keep loggers at bay. They claimed they heard the rattling of dead men’s bones and shrieking skeletons that threatened to haunt anyone who dared cut down trees on the island. In a Vancouver Courier piece about the haunting, writer Chris Miller described the occurrence. “Perhaps suspecting that human agencies, rather than supernatural ones, were responsible, the chief of police suggested, tongue-in-cheek, that his men carry torches so they would be braver and the ghosts a little less active.”

The island is home to too many bodies to count: First Nations people; British merchant sailors; early pioneer residents of Moodyville, Hastings Sawmill and the Granville townsite; Canadian Pacific Railway workers who died during construction; victims of the Great Vancouver Fire of 1886; those who succumbed to smallpox; and, possibly even some of the squatters who made the island their home for many years. Since the island became the HMCS Discovery naval station in 1942, most supernatural occurrences have been reported by naval reservists. Several have recounted hearing footsteps on the stairs and furniture being moved upstairs when no one else was on the island. Others have witnessed a strange glow emanating through the trees. They say the glow sharpens into human form.

Though some of the First Nations remains are said to have been moved to a graveyard near Lumberman’s Arch, it’s unclear whether any of the other bodies have ever been exhumed. In his Courier article, Miller quotes early settler, Harold Ridley, who described the burials on the island. “The little collection of graves was not a cemetery; just little graves beneath the trees, with little fences of sharp, pointed split cedar pickets and a headboard; [over time] the name became obliterated by the weather and the grass grew tall and went to seed.” Due to the nature of the scattered and unmarked graves, it’s unlikely that many of the remains ever left Deadman’s Island… You can hear many more strange tales about Stanley Park when you join us on The Dark Secrets of Stanley Park Walking Tour. Sources: “Spirits of Deadman’s Island” by Chris Miller in the Vancouver Courier “This Week in History: Vancouver seethes as Deadman’s Island leased to American Industrialist” by John Mackie in the Vancouver Sun “4 Things You Didn’t Know About Stanley Park” by Lisa on Kitsilano.ca Legends of Vancouver by E. Pauline Johnson on Gutenbury.org

Hear many more strange tales from the park on The Dark Secrets of Stanley Park Tour, every Wednesday, Saturday, and Sunday from May to November