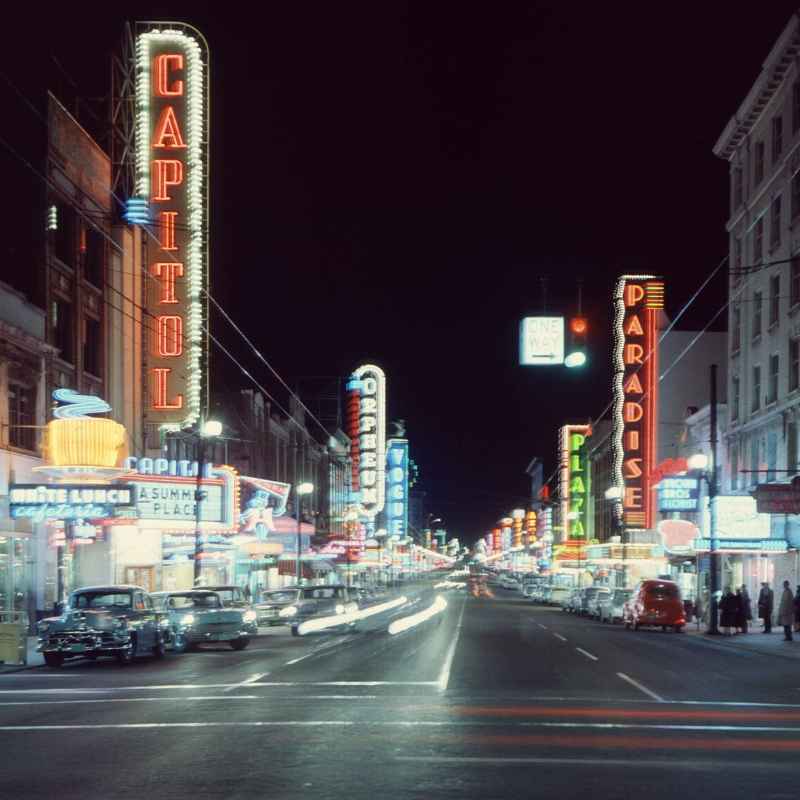 Look at the neon! Vancouver once had as many as 19,000 neon signs. Would you believe that was more than Las Vegas? But by the 1970s, we in Vancouver were starting to think of neon as an eyesore. So the city passed legislation to discourage it. Now, only a few dozen of the original signs remain.

The neon stretch on Granville, from Robson to Davie, was “Theatre Row” Vancouver. Only a few of these buildings are still entertainment venues, such as The Orpheum and The Vogue. But there were others: The Magic Theatre, The Caprice, The Capitol Theatre. This has been the city’s entertainment epicentre for decades.

For as long as Granville Street has been here, it’s always had entertainment. The Vancouver Opera House was constructed on the corner of Granville and Robson as far back as 1891.

Other theatres followed – and upon the advent of motion pictures, movie theatres, too. This stretch of Granville is still Vancouver’s “Entertainment District”, though the kind of entertainment it offers is very different from the heyday of Theatre Row.

To find out more about these theatres, the entertainment they offered, and the stories connected to them, join us for a scandalous afternoon walk on the Art Deco and Chocolate Tasting Tour. (Did we mention chocolate?)