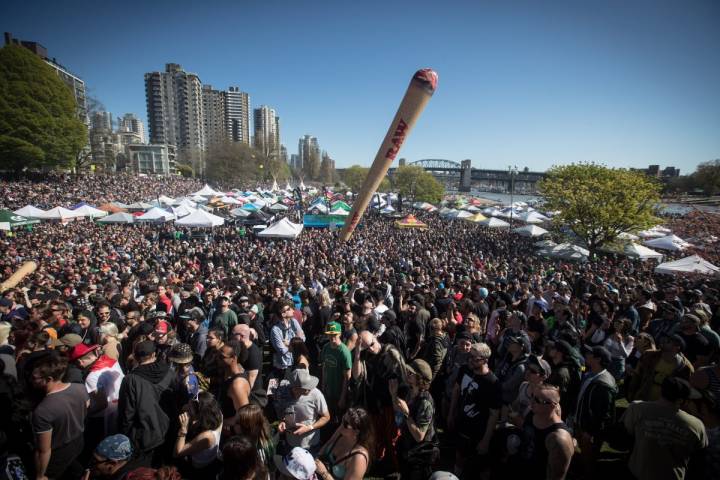 Like many cities around the world on April 20 each year Vancouver is host to a lively pro-marijuana rally. Known as ‘4-20.’ In recent years the event moved to Sunset Beach to accommodate the huge growth in numbers now that cannabis is legal in Canada. A haze of smoke hangs over a cheerful if somewhat relaxed crowd and the atmosphere is generally rather jovial. Things weren’t always that way. In the swinging sixties and early seventies, marijuana was the preserve of the hippy movement and strictly illegal. The political establishment and mainstream media were hysterical in their invective against the hippies. Hippy “dope fiends” were blamed for all kinds of social problems. Vancouver’s mayor at that the time was Tom “Terrific” Campbell. A conservative individual, not renowned for great sympathy towards pot-smoking counter-culture movements.

Putting aside Tom’s moniker of “Terrific” for one moment, he is not a man looked back upon with great affection by Vancouverites. Other progressive and noble ideas he had or supported were to knock down Strathcona and Gastown to build a giant freeway, ban the Georgia Straight, and cancel outdoor music festivals. He did succeed in accelerating Vancouver’s culture of social activism, as concerned citizens banded together to fight his agenda. The Strathcona Property Owners and Tenants Association managed to stop the freeway getting built. The Georgia Straight also survived, although its editor of the time Dan McLeod was repeatedly beaten by police. We did lose the final leg of the 1970 Festival Express rock ‘n’ roll tour to Calgary though, thanks to Tom’s terrific promise to close the festival down with a police raid, should it go ahead. On a sunny Sunday morning on August 7, 1971 a hippy-led ‘smoke-in’ was held in Maple Tree Square in Gastown. The Georgia Straight had this to say about this event, “People should realise that it is intended to be a peaceful, sharing and joyous high energy event aimed at making the marijuana laws irrelevant.” Does sound fun! In fact the event organizers were ‘yippies’, a more radical variety of hippies that wanted to build a “New Nation”. The yippies desired the creation of alternative, counterculture institutions such as food co-ops, underground newspapers, free clinics etc. 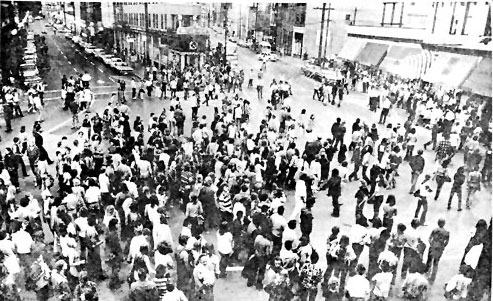 The Gastown Smoke In

Things started off peacefully enough with a watermelon-sized mock joint being passed around the 1,200 strong crowd. A sound system played the Grateful Dead and Jefferson Airplane. Around 300 popsicles were handed out by organizers that were allegedly ‘infused with LSD’. According to an excellent report on the day’s events by Michael Barnholden in his book “Reading the Riot Act”, the police chief decided quickly that this crowd needed to be dispersed and asked the fire chief to deploy the fire hoses. The fire chief replied “we fight fires. Not people”. Accounts of why the police attack started vary. Vancouver blogger Father Theo says he saw a young man dangle his legs out of a second floor window of the Hotel Europe, accidentally knocking a neon sign and causing a piece of glass to break off. At any rate, something triggered the order by the police chief to disperse the crowd. And what’s more effective in dispersing a crowd than a club-wielding riot squad and mounted division? According to the official inquiry into the events one woman was ‘dragged, screaming, by two officers who held her by the hair and one arm, about 100 yards over broken glass to a waiting wagon’.

The thing with hippies (and yippies) was that while they were long-haired anti-establishment types, they were also mainly university students and children of the middle class. And when battered and bruised kids came home that day, their parents erupted. The public reaction was also fed by the media; a number of journalists had been at the events that day and received police beatings for their trouble. The BC Attorney General called a public inquiry, led by a judge Dohm, which lasted 10 days. The inquiry blamed the riot squarely at the feet of the yippie organizers, whose “true motivation is their desire to challenge authority in every way possible… Any popular cause serves their purpose if it enables them to gather a gullible crowd who may act in such a way as to defy any authority.” Although Justice Dohm also noted that individual officers used “unnecessary, unwarranted and excessive force”.

Mayor Tom “Terrific” Campbell blamed the whole affair on an anarchistic conspiracy, but would leave the mayoral office in 1972, not seeking re-election. If you are interested in learning more, Vancouver blogger Father Theo was at the rally that day and has an excellent account of the events on his website here.