1935 was a volatile year in Vancouver’s history. It was the tail end of the Great Depression and Vancouver had been hit harder than any other Canadian city. After several years of destitution and poverty, both the unemployed and those in poorly paying manual jobs were low on patience. An atmosphere of tension and social unrest hung over the city.

Things really boiled over in April 1935 when 2,000 men who had been working at Government “relief” camps in the BC interior went on strike. Men at the camps would work bush-clearing or road building for 20 cents a day, only a tenth of what an employed labourer would receive for the same job. The strikers took boxcars to Vancouver and set up camp in Victory Square to protest the squalid conditions and terrible pay of the relief camps. During their occupation of Victory Square the men held several public protests and rallies, a number of which turned into violent clashes with the police. At one point the strikers even occupied the Hudson’s Bay Company department store. After two months in Vancouver the men would leave for the “On-to-Ottawa Trek,” to take their grievances to the federal government.

It wasn’t only unemployed men forced to work at relief camps who protested that year. The union of longshoremen was at that time heavily influenced by communist organizations like the Workers’ Unity League. The union had been locked in a bitter dispute with the Shipping Federation of British Columbia, who represented a number of waterfront companies and was the biggest employer on the docks. Eventually negotiations broke down over claims the Federation was discriminating against union workers. The Federation lost patience and locked the union workers out of the port, bringing in replacements (commonly labelled as “scabs” by the union). The strike had begun. 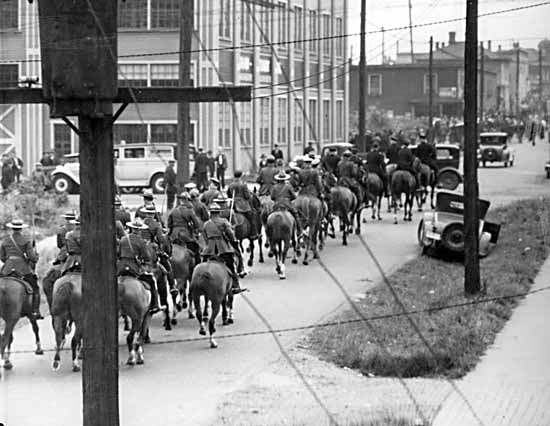 Policemen on horseback en route to the Battle of Ballantyne Pier

On 18 June 1935, around 1,000 striking longshoremen marched to the entrance of Ballantyne Pier, where the non-union workers were unloading cargo from ships. The strikers claimed they wanted to talk peacefully to the non-union workers, although it’s likely the strikers intended to be as “persuasive” as possible in their planned discussions! At the pier entrance the Vancouver Police Chief Constable Colonel W. Foster met the protesters and stated in plain terms they would not be allowed to proceed, issuing a decree that the protesters’ legal right to picket was being suppressed. The protesters refused to turn back. A large contingent of Vancouver city police, BC provincial police, and Royal Canadian Mounted Police descended upon the protesters and attacked them with clubs and tear gas. A melee broke out, with many protesters being chased along Powell Street by police on horseback, wielding clubs. Other protesters endeavoured to stand their ground and fight back, by throwing rocks and other projectiles. 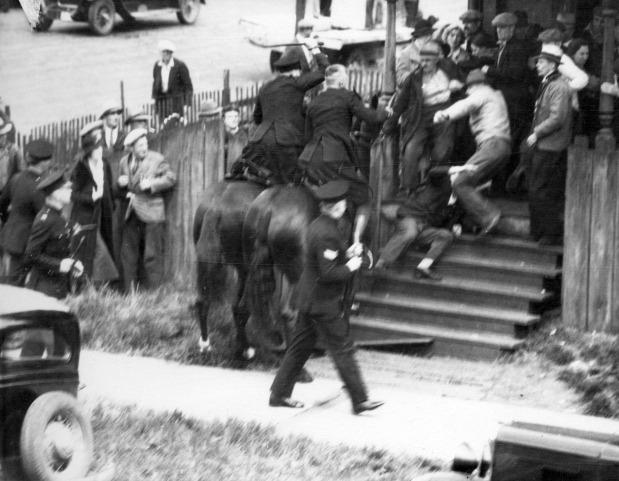 The Battle of Ballantyne Pier

All in all, the Battle of Ballantyne pier lasted for about three hours. Ultimately, 28 men were hospitalized and 24 arrested. One bystander was shot in the legs by a police shotgun. The offices of both the longshoremen union and the communist organizers were raided by the police the same day. Police shot tear gas through the windows to drive out occupants before raiding each of the offices. Days later, Mayor Gerry McGeer declared that striking longshoremen would no longer be eligible for relief payments for themselves or their families. 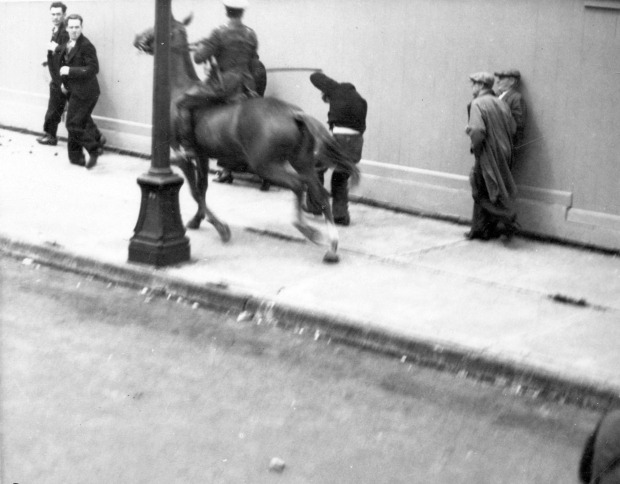 The longshoremen strike would ultimately last until December of 1935, before fizzling out. After the Battle of Ballantyne Pier, the optimism of the strikers wavered and the militant wing of the union lost influence. However, conflict between organized labour and the government would continue up until the start of the Second World War in 1939. As late as 1938 further relief camp strikes and protests took place in Vancouver. In ’38 the strikers would occupy the downtown Vancouver Post Office, before again being evicted by police using clubs and tear gas.