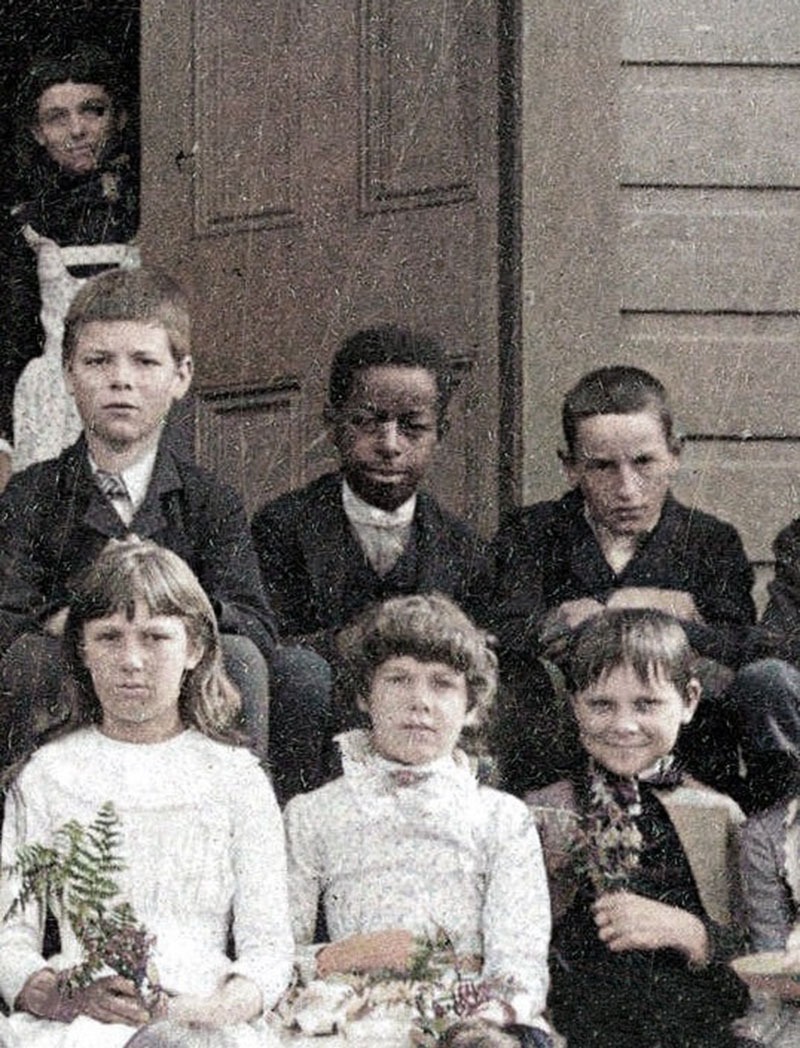 Hiram Scurry escaped slavery and fought in the US Civil War. In 1886, he moved to Vancouver with his wife Martha and six children to open a barbershop in Gastown. Find out what happened next to the Scurry family in our blog for Black History Month.

Hiram Scurry: The Patriarch of the Scurry Family

Hiram Scurry’s timing wasn’t the best when he came to Vancouver in May 1886. The newly incorporated city burnt to the ground a month after his arrival. Hiram had come from Winnipeg to set up a barbershop before sending for his wife and six children. This would make the Scurry’s Vancouver’s second large Black family (after the Sullivans) to settle in the fledgling settlement. 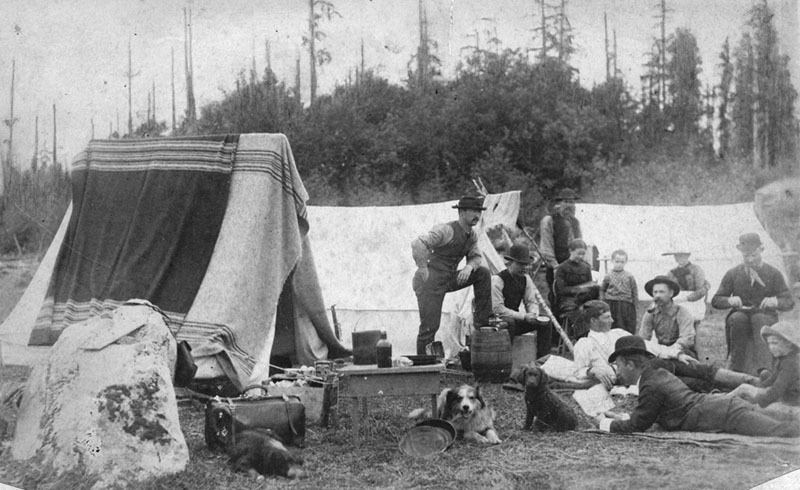 Census takers in 1891 counted Vancouver’s Black population at 27 residents – 13 of whom belonged to either the Scurry or Sullivan families – of a total population of 18,260.

When he realized the severity of the 1886 fire, Hiram packed up as much of his belongings as he could manage and headed towards False Creek to join the other refugees. Although, his barber chair was the only thing not shed along the way. 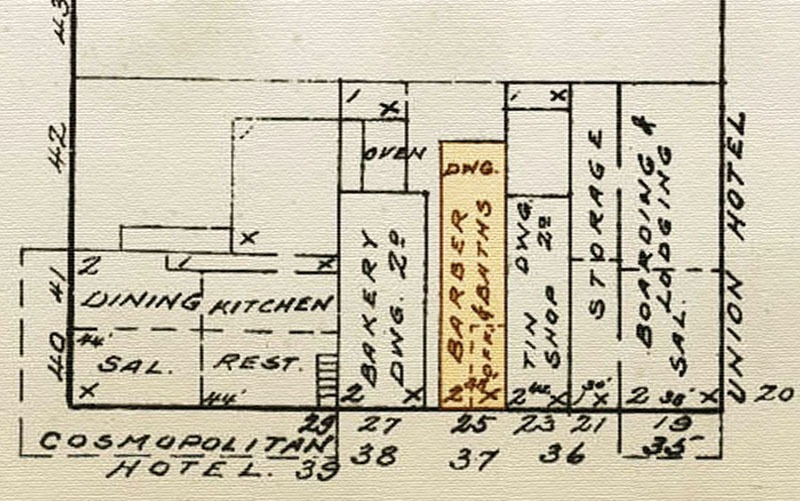 As traumatizing as the Great Fire must’ve been, it was a minor setback for Hiram. His barbershop at 25 Abbott Street was up and running just weeks later. Eventually, the address was changed to 229 Abbott, and would also serve as the family home. Martha and the Scurry kids joined him in December 1886; the new transcontinental railway line didn’t quite reach Vancouver yet, so they had to take a steamship from Port Moody for the final leg of their journey.

Hiram was born in Virginia in 1833. His absence in American census records suggests he was born into slavery. But by 1863 he was living free in Michigan, where he was drafted to fight in the Civil War. He left the Union Army intact and with the rank of colonel.

Harvey Scurry, about age 11, from his class photo at East School on Oppenheimer Street (Cordova) in 1887 or 1888. City of Vancouver Archives #Sch P46 (cropped; colourized)

After the war, Hiram made his way to Owen Sound, Ontario, and married a biracial 19-year-old named Martha French in 1867. Their first child, Henry, was born in 1869 but died a couple of years later. Elijah was born in 1871. The family migrated west, first to Thunder Bay, then Winnipeg. By the time they reached Vancouver, Elijah had five younger siblings: Charles, Harvey, Albert, Cassie, and Peter. 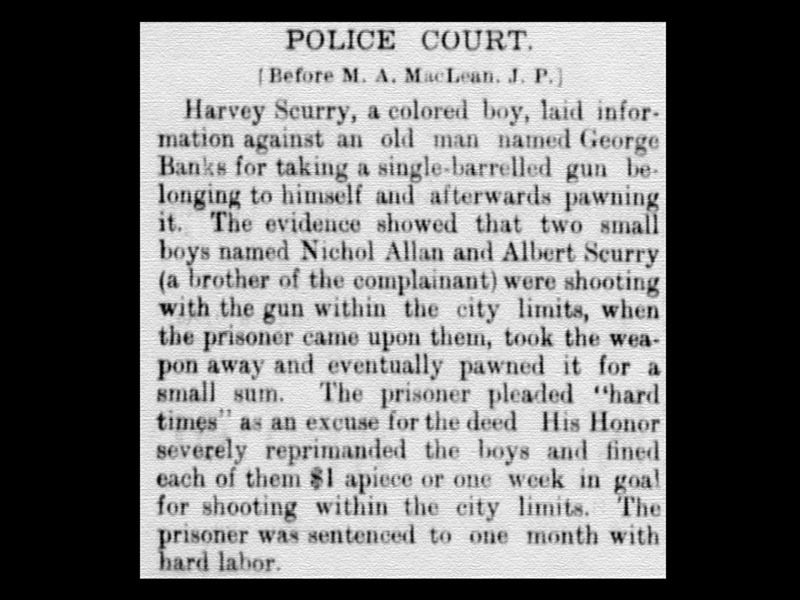 13 year-old Harvey Scurry, getting his gun back after an old man stole it from his little brother, 11 year-old Albert. Daily World, 7 February 1889

Hiram helped organize the Vancouver Barbers’ Union, which standardized prices and put an end to Sunday barbering. Like everyone else in town with the means, he also dabbled in real estate. But his most intriguing sideline was co-inventing a steam-powered, underwater dredging machine that he sold to Fraser River prospectors. This got him a mention in Scientific American magazine.

Check Out Our Tours

Hiram was the patriarch of the Scurry family, but Martha’s influence extended beyond child-rearing. She was also a hairdresser and newspaper ads show that she somehow usurped her husband to become “proprietress” of the barbershop, while he was demoted to “manager.” 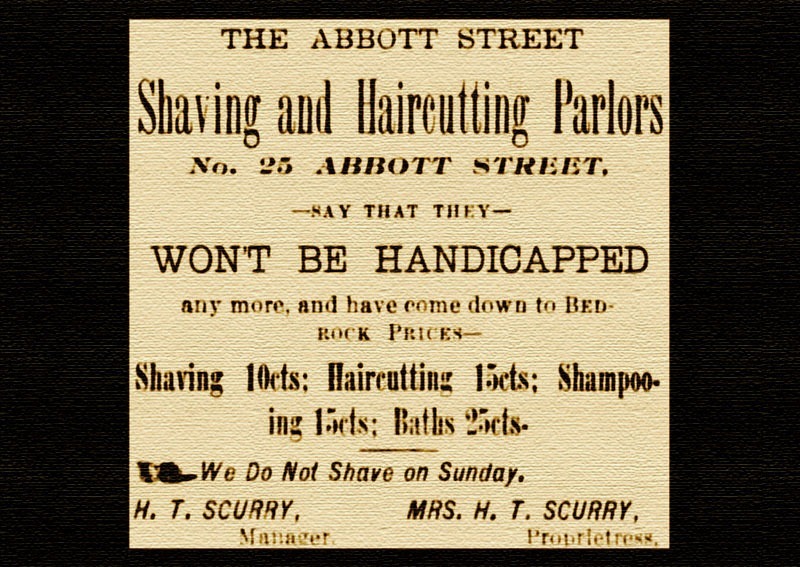 After Hiram’s death in 1895, Martha moved to 534 Cambie Street and ran a rooming house while her sons kept the barbershop on Abbott going. Her best-known lodger was Joe Fortes before he moved to English Bay to take up lifeguarding full-time. 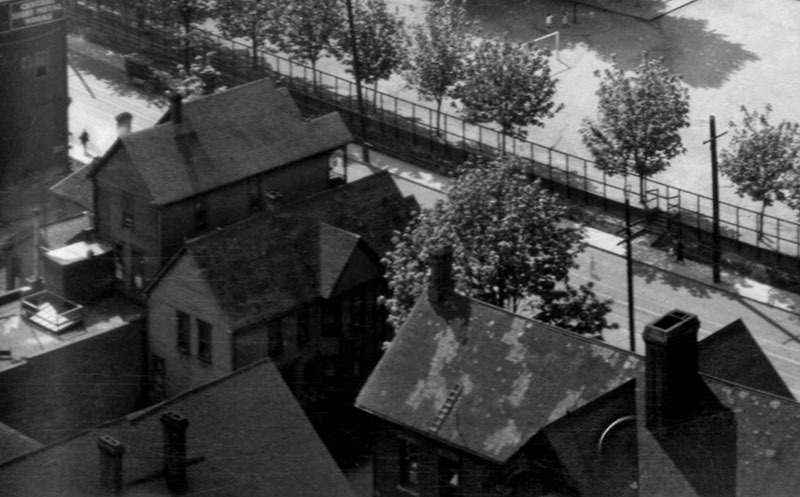 Martha Scurry’s boarding house at 534 Cambie Street was the house in the middle. Photo by WJ Moore (cropped), City of Vancouver Archives #N2208

Elijah Scurry: The Eldest of the Scurry Family

Elijah, or Lige, was the scrappiest of the Scurry bunch. He found himself in front of a magistrate for fisticuffs on several occasions, going back to his time in Winnipeg when he was a 14-year-old newsboy. Eventually, he found an outlet for his aggression playing lacrosse, the most popular sport in early Vancouver.

Lacrosse in the 1890s was extremely violent; broken bones and brawls – even in the stands – were all too common, and police were always on hand just in case. Elijah was one of the best players in the province and was known for being exceptionally fast and tough. The rivalry between the three BC teams was fierce. 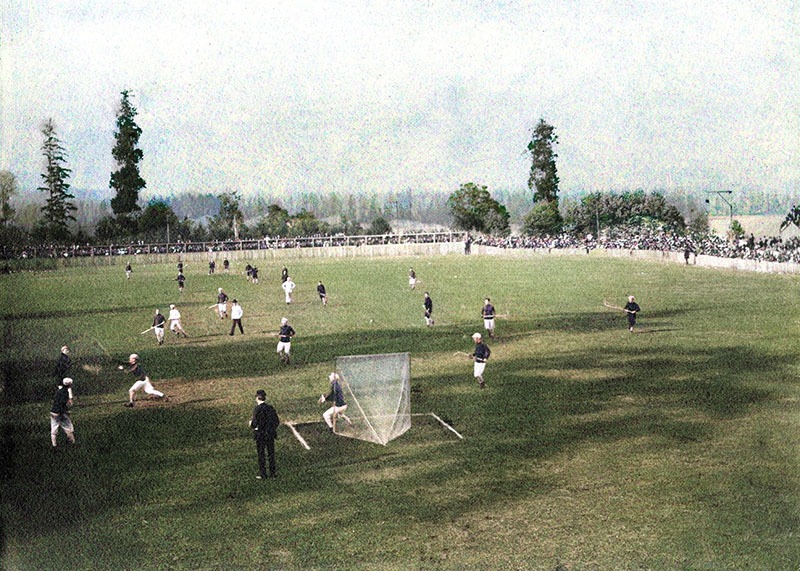 In one notorious game in 1891, New West captain James Gow hurled racist slurs at Scurry for refusing to hand over the ball. “The insults offered Scurry would be a disgrace to the most barbarous town,” opined the World newspaper, “and the remarks yelled out at him in reference to his colour made every honest man’s blood boil with indignation.” 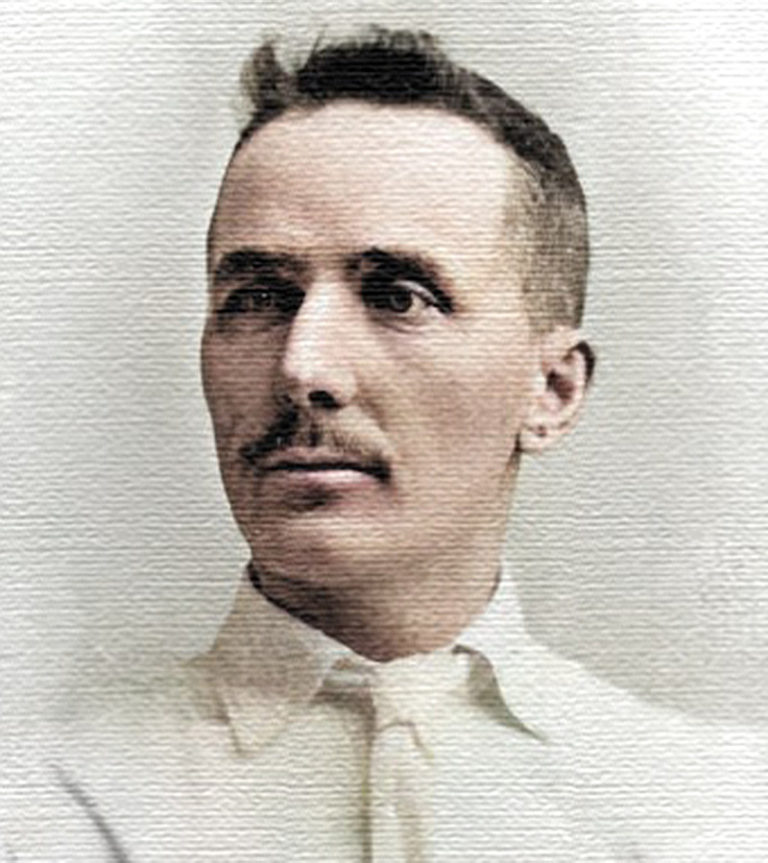 Lige responded with his own insults, for which Gow had him arrested. He was charged with using “obscene, blasphemous and grossly insulting language.” A riot was averted only by someone paying the $10 fine on Scurry’s behalf, which allowed him to return to the field. The World and others claimed the incident was a set-up, given the dubious calls the referee had made throughout the game and the eagerness of the New Westminster constable to arrest Scurry on such a spurious charge. 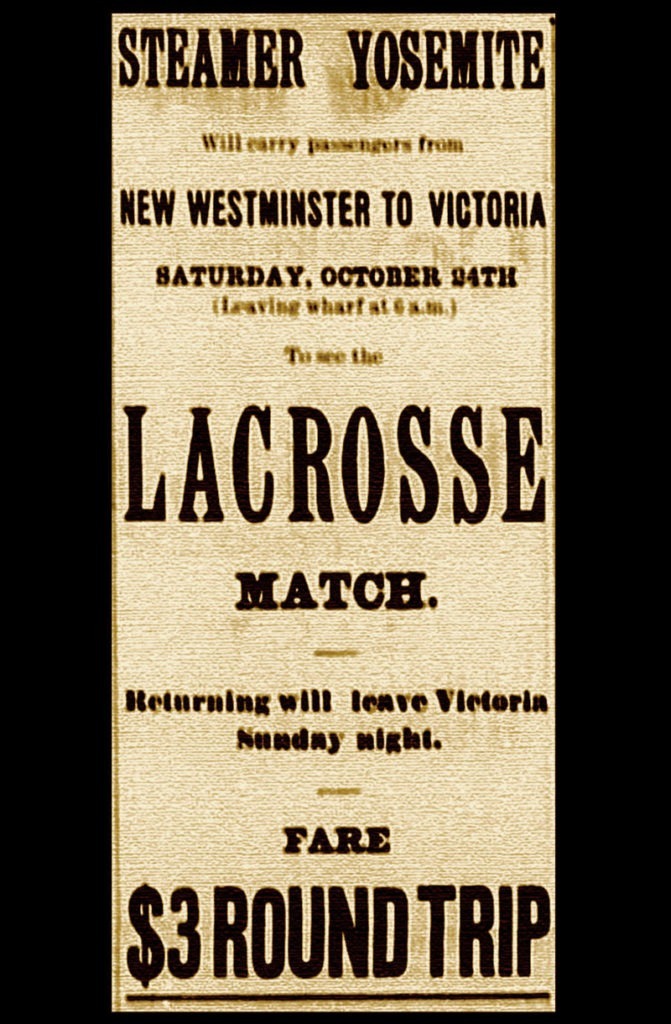 The 1891 championship lacrosse game between Vancouver and New Westminster was held on neutral ground in Victoria. It would be Lige Scurry’s last game. Daily Columbian, 24 October 1891

The next game would be Elijah Scurry’s last. Whether accidental or payback, Lige broke a New West player’s collar bone in a collision. The game won Vancouver the championship that year, but the New Westminster and Victoria teams colluded to ban non-white players from the game for the 1892 season. 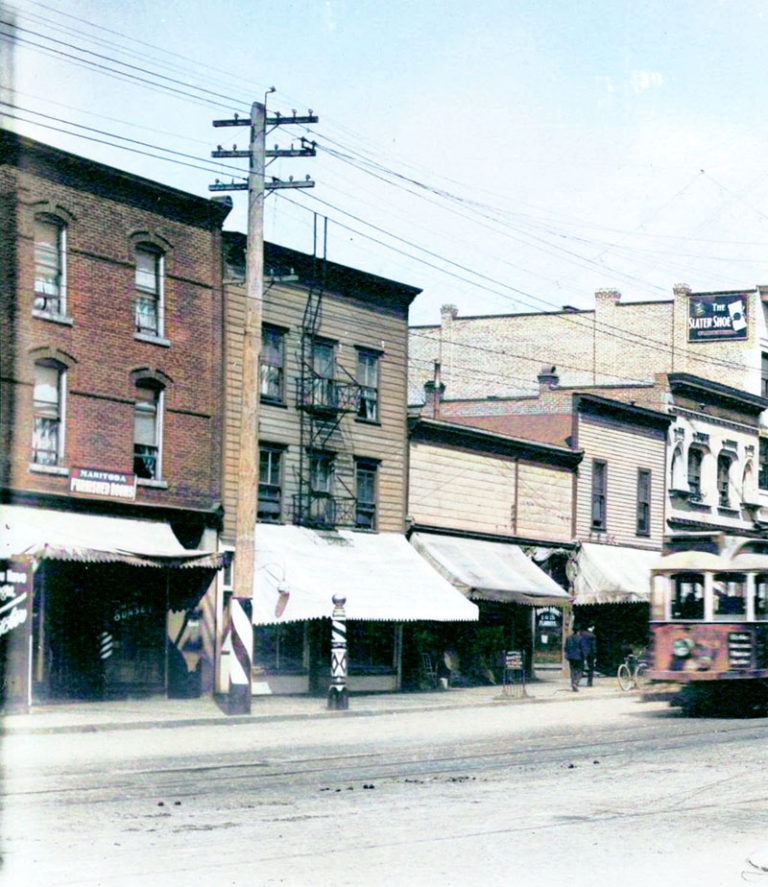 Lige Scurry opened the Railway Porters’ Club in the brick building on the left in 1903. City of Vancouver Archives #677-649 (cropped/colourized)

In 1903, Lige opened the Railway Porters’ Club at 107 East Hastings Street. Railway porter was one of the few occupations open to Black men in Canada and the US, and the club gave them a place to stay during stopovers. It was also one of the first social institutions specifically for Vancouver’s Black population. 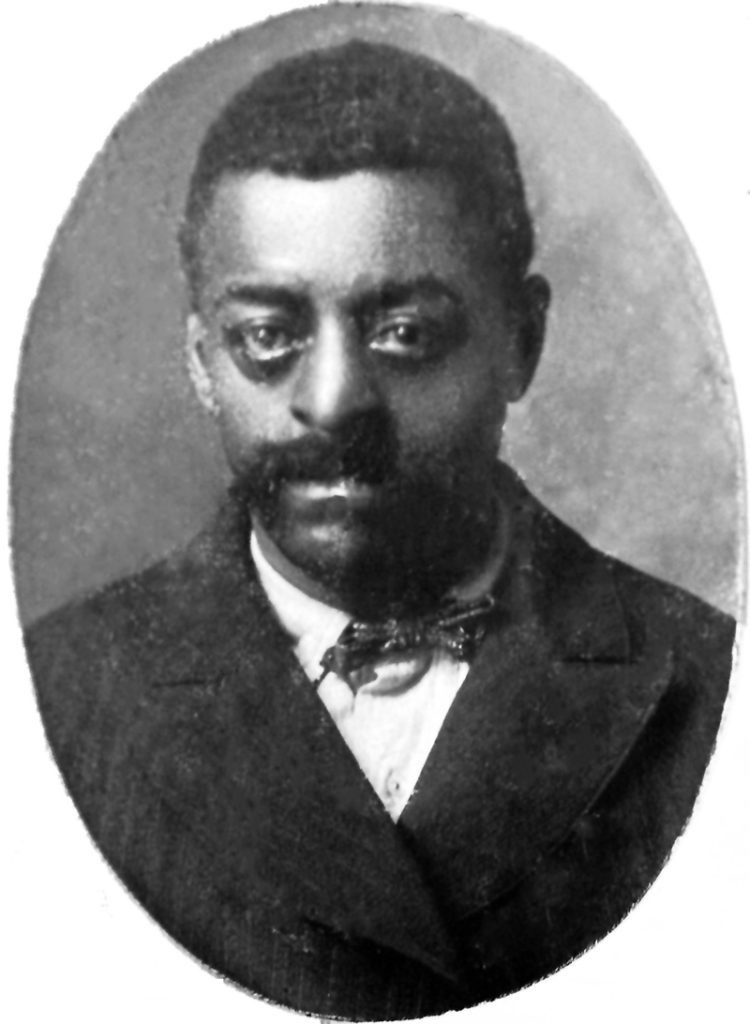 Police raided the Railway Porters’ Club on the grounds that it was a disorderly house. Women arrested were known prostitutes from the red light district on Dupont Street. Elijah’s lawyer argued that the mere presence of prostitutes was not proof that prostitution was taking place there. If it were, he argued, “every restaurant or house of amusement” in the city could be classified as a brothel. 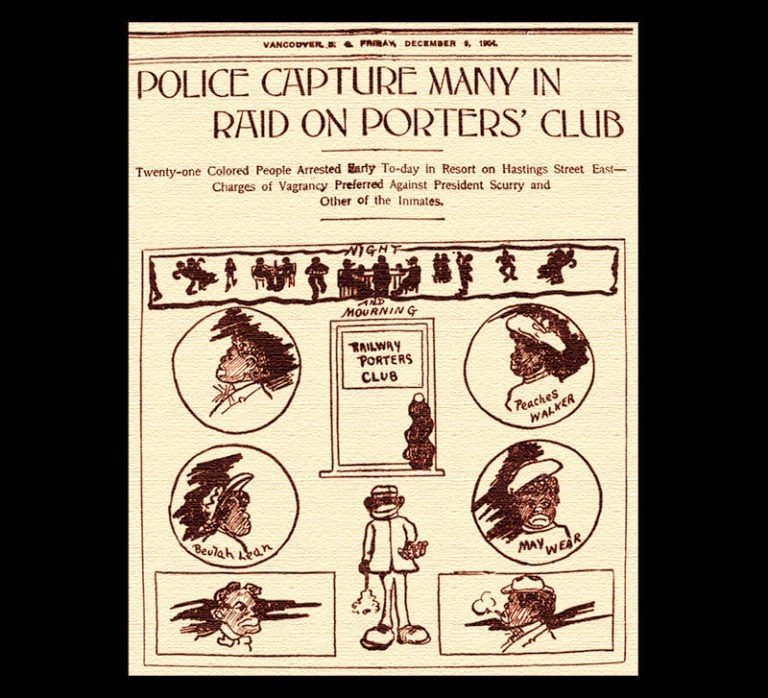 Racist cartoon in the Daily World newspaper reporting on the police raid of the Railway Porters’ Club, 9 December 1904.

The judge nevertheless sided with the police. In terms of hard evidence, he pointed out that Scurry was selling liquor without a license and sentenced him under the vagrancy law to three months of hard labour (on the chain gang pulling tree stumps) plus a $50 fine. Scurry’s club didn’t survive, but a succession of other Railway Porters’ Clubs kept his legacy going in Vancouver for years.

Letter to the editor objecting to racism in reporting one of Albert Scurry’s boxing matches. Daily World, 23 September 1898

Peter and Albert Scurry both played lacrosse, joining the Vancouver team in 1893 (after the colour bar was lifted or forgotten). Neither achieved the notoriety of their brother but were respectable players. After lacrosse, Peter dabbled in bicycle racing, and both he and Albert took up prizefighting and boxed throughout BC for several years in the welterweight and lightweight classes respectively. They were also both killed by their spouses. 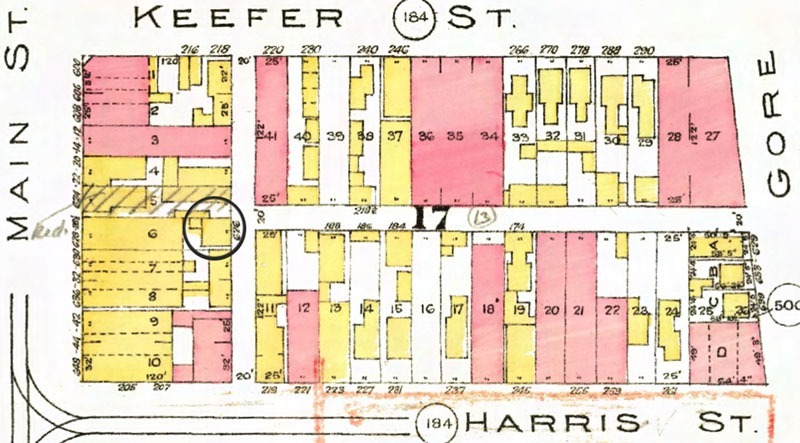 Section of 1912 fire insurance map showing the location of the Park Lane cabin (circled) where Peter Scurry and Julia Lewis lived for six years until she killed him. Note Harris St is now East Georgia. Park Lane included what’s now Station Street to the south, and was informally considered a continuation of Hogan’s Alley, which ran east/west between Union and Prior streets. Source: City of Vancouver, Van Map

Pete Scurry lived with Julia Lewis in a cabin at 626 Park Lane for about six years. Julia had purchased a .38 revolver after noticing a man lurking in the alley. One day in 1909 she went to remove the bullets from the gun to put them back in the box so she could pawn the gun and ammo. The gun went off, killing Pete. There were suggestions that the couple had quarrelled over Peter Scurry’s friendship with another woman. Julia vehemently denied this but was charged with murder. She wept profusely at each court appearance and was acquitted by a jury. 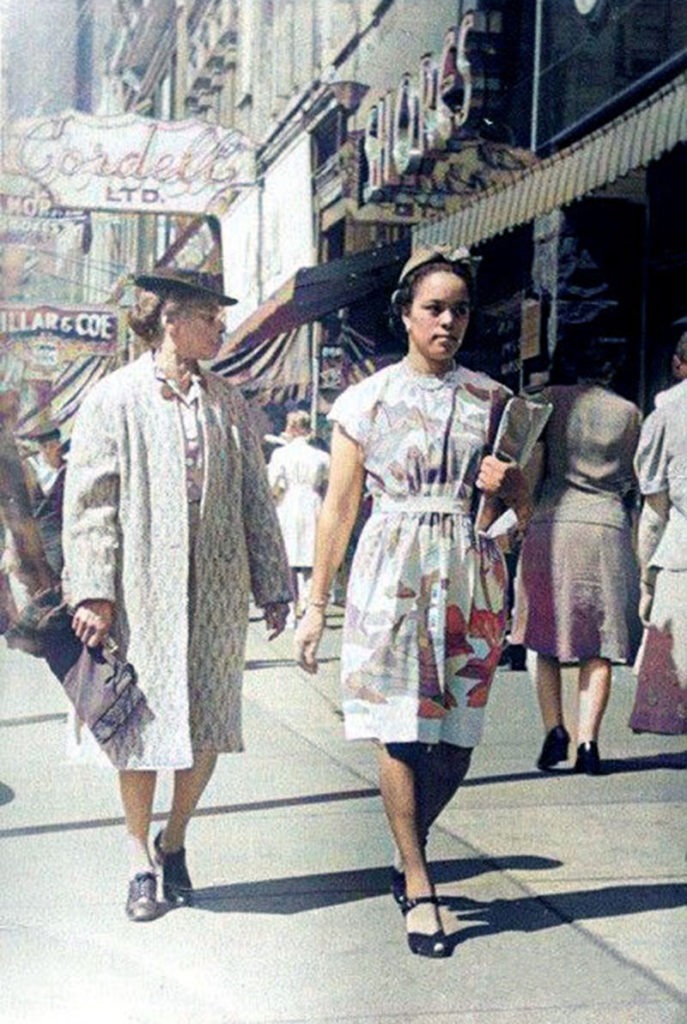 Al Scurry married and moved to Tacoma. His wife, Carrie, split his head open with an axe in 1920. She told police that she didn’t mean to kill him and that they had argued over his objecting to his step-daughter attending a social function. 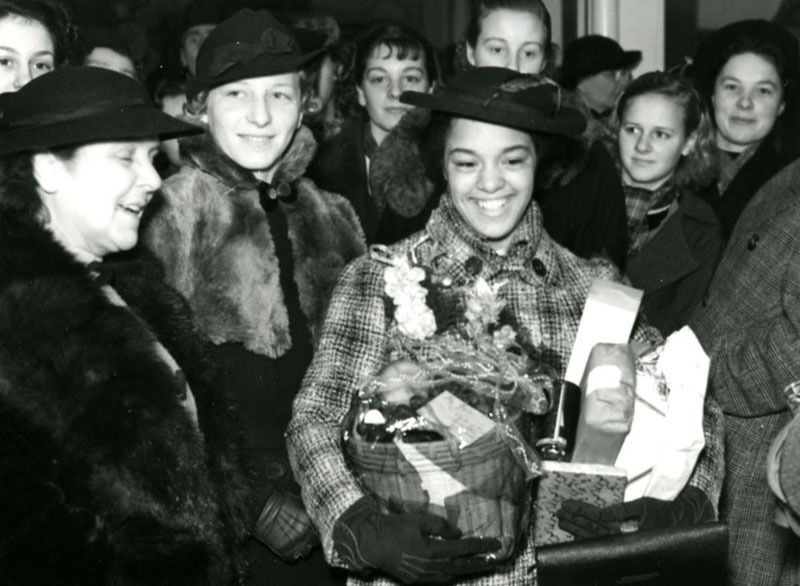 Barbara Howard at the CPR pier for her send off to the British Empire Games in Australia, 22 December 1937. Vancouver Sun photo.

Cassie, the only girl in the Scurry family, lived with her mom on Cambie Street until she married an Alabamian named Samuel Howard in 1907 and moved to Nanaimo and 10th Avenue. Her daughter Barbara became a local celebrity while still a student a Britannia High School.

This is one of a series of letters to the editor of the Vancouver Sun chastising the paper for using racist language in reporting Barbara Howard’s record-breaking sprint that got her into the Empire Games. Note that Elijah was Barbara’s uncle; Hiram was her grandfather. Vancouver Sun, 2 June 1937

In trials for the British Empire Games, Barbara Howard beat the Games’ record for the 100-yard dash by one-tenth of a second. That earned her a spot on the national team and she became the first Black female athlete to represent Canada on the world stage at the 1938 Empire Games in Sydney, Australia. Barbara helped win a couple of medals in relay races but was disappointed to only place sixth in the 100-yard dash. Barbara planned to redeem herself at the Olympics, but that window closed when the Games were cancelled for the duration of the Second World War. 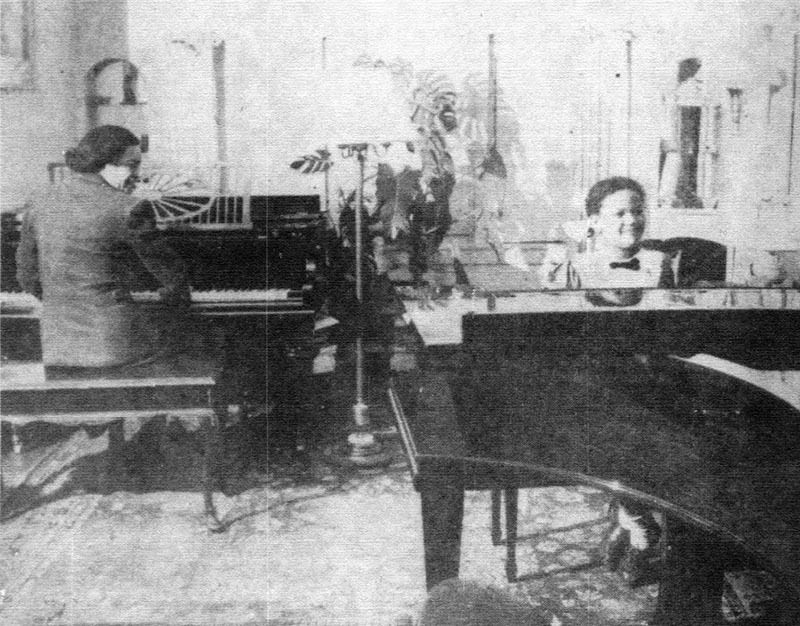 Cassie Howard practicing piano with her 11 year-old granddaughter, Charlene. The photo was part of a newspaper profile of Charlene, who had already made a name for herself as a piano virtuoso. Province, 6 February 1954

Barbara told her uncle Charles Scurry that she wanted to teach physical education. He had been supporting the family since Barbara’s father died in 1929 and paid for her to attend the Vancouver Normal School for teacher training. Barbara became the first person of colour hired by the Vancouver School Board. She later got her degree in education from UBC and taught for decades. Barbara was finally recognized for her athleticism in her 90s and was inducted into the Burnaby, BC, and Canadian Sports Halls of Fame. Barbara Howard passed away in 2017 at the age of 97. 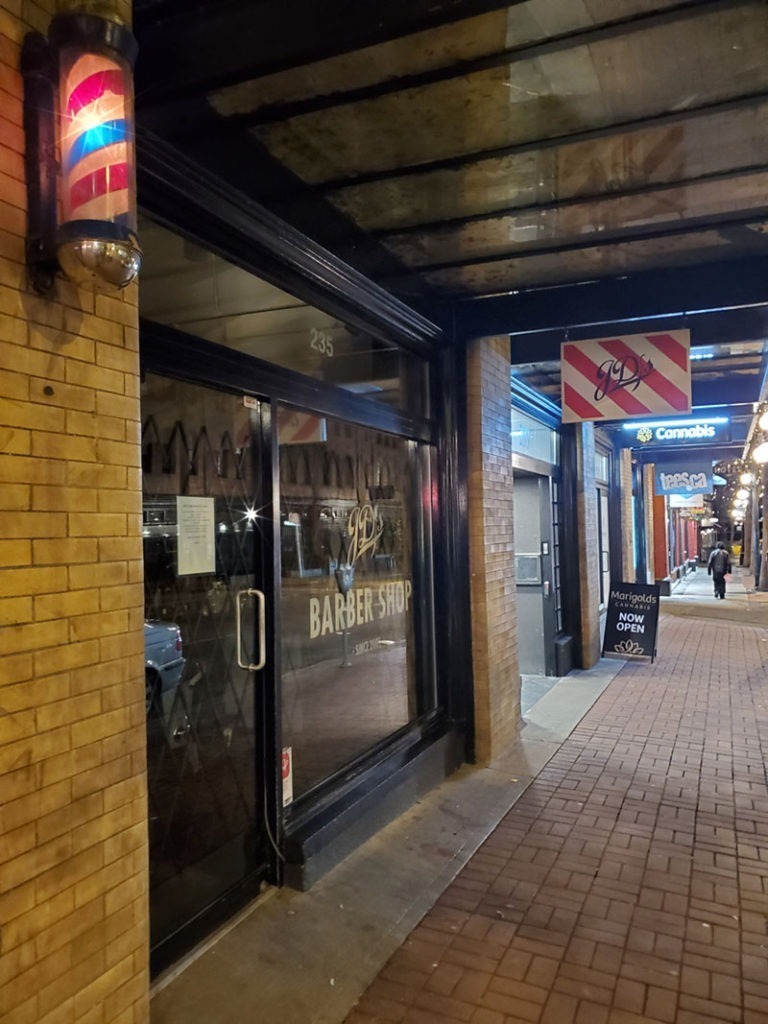 JD’s Barber Shop at 235 Abbott Street in 2021. Coincidentally, it’s in the same spot as the barbershop Hiram Scurry opened in 1886.

As Black History Month wraps up, we celebrate the Scurry family and their contributions to Vancouver’s history.

Check Out Our Tours 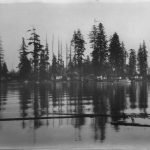